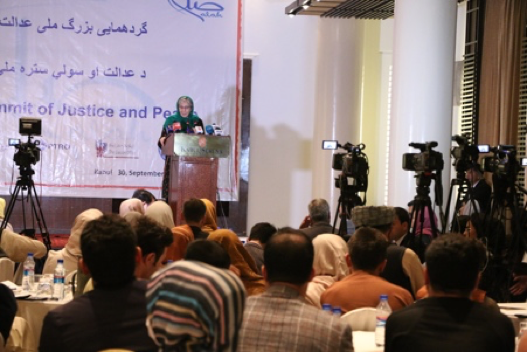 The Lobbying and Advocacy for Access to Justice Project was funded by the Dutch Ministry of Foreign Affairs and implemented by Cordaid-Afghanistan in partnership with SALAH consortium from 2016 to 2020. Salah consortium consists of five top Afghan civil society organizations including; The Liaison Office (TLO), Cooperation for Peace and Unity (CPAU), Equality for Peace and Democracy (EPD), Peace Training and Research Organization (PTRO) and Sanayee Development Organization (SDO). Through this project, these organizations worked together to narrow down the gap between the established state structures and the common public that these structures are meant to serve, especially in the justice sector. The project was implemented in five provinces of Afghanistan by SALAH members based on their geographical coverage. This included TLO working in Khost, EPD working in Nangarhar, PTRO working in Kandahar, SDO covering Balkh and CPAU working in Kunduz.

The primary goal of this project was to improve accountability within the justice system and make it accessible for all Afghans including men, women, and children.

The main objective of this project was to increase the trust among citizens, especially women, in the customary and statutory justice providers and to increase the public awareness on rights and justice system procedures.

At the initial stage of the project, a network of relevant stakeholders including the civil society organizations, media organizations, Afghanistan Women Justice Association, Afghanistan Independent Bar Association, and Afghanistan Prosecutors Association was created in all target provinces. The network was called SALAH Access to Justices Network. In the next stage of the project, capacity building programs were run for this network in order to enable its members to engage in lobby and advocacy efforts at local and national levels and monitor the enforcement of policies in justice sector. TLO implemented the project activities in Khost and following activities were undertaken during the project period:

The project ensured that all the SALAH Access to Justices Networks created within the target provinces by TLO as well as by other SALAH partners are well represented by justice actors. These networks not only increased the level of awareness among people on their rights and how to claim their rights, but also monitored and oversaw justice system in all the target provinces. At the institutional level, the changes made through the project entailed a decrease in corruption, an increase in the number of cases resolved by the formal justice system, increased knowledge among formal justice actors including the female judges, and improved quality of work among formal and informal justice systems. In addition, the project increased the coordination among different justice actors, civil society, and judicial institutions both at provincial and national level. Furthermore, human rights violation cases were publicized and the reports were submitted to respective justice institutions through monitoring of the court cases and establishment of complaint mechanism within the justice institutions in each target province.

No comments to show.